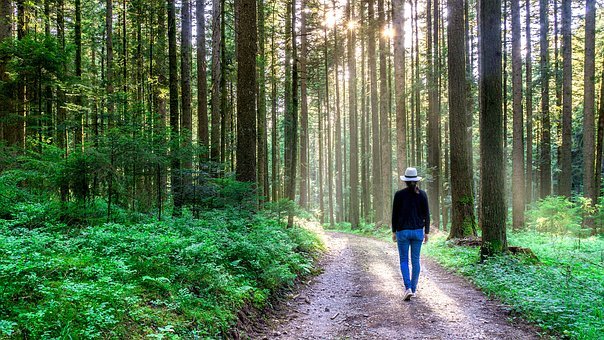 A Little Boy goes for a Walk

Once upon a time, long ago and far away, there lived a little boy named Carl. He loved to go for long walks along the seashore and loved to walk in the forest. He loved to walk with a purpose. Little children love to walk and run. They love to roam and explore. This is how they learn about their world. They don’t have fancy names for walking, they just let their little feet take them wherever they want to go. Carl loved to play, but most of all, he loved to play outdoors.

Little Carl walked in the rain, and he walked in the snow. He walked when the weather was sunny and he walked when the sky was filled with clouds. Everyone likes to walk when it’s warm and sunny. Even grown-ups like to walk when the weather is warm and sunny. Children don’t need complicated reasons for walking, they just open the door of their house and go walking. They walk and run for no reason at all.

Grown-ups don’t believe that squawking seagulls or chirping squirrels are good reasons for going on a walk along the seashore, or on a trail in the forest. They are older and bigger than little children they do mostly whatever they want. One day Carl will be a grown-up. Little children cannot avoid becoming grown-ups. This is the most dangerous thing little children face. They cannot avoid growing up.

Grown-ups say and do strange things. This is how it appears to little children. They say things that don’t always make sense. They tell young children, “Go outside and play”, but they seldom go outside to play. They also say, “Don’t fight with your brothers and sisters”, but they fight with other grown-ups all the time. Sometimes they fight with them a lot. Maybe this is why they like wars so much. Wars were invented by grown-ups, so fighting is like practising for war. No special reasons are needed to begin a war. It can be as simple as wanting what someone else has.

They also like to raise their voices and say bad things to one another. This usually escalates into fighting, which leads to their favourite game – the game of war. They love war games, and they spend most of their time playing this game. They just can’t get enough of it. This confuses the little children.

Wars are Bad for Little Children

The grown-ups say, “don’t fight”, but they do all of the fighting. Children don’t know about fighting and wars until they learn it from grown-ups. It seems as if fighting and wars were only for grown-ups. Little children find this hard to understand because, in some countries, young children are permitted to fight in wars.

This is a big secret that the grown-ups hide from the little children. They do not want the children to know this. They say, “Wars are bad”, but they always play this game of war. The game of war is very tiring, but war games have rules, and one of the rules is stopping for a rest, and another is stopping to have their meals.

The war games have many rules, and it takes a long time to learn to learn all the rules, but they are permitted to play even when they don’t know all the rules. This does not appear to bother them, and it doesn’t affect the game in the least. “The war must go on”, they say, “We must continue, we cannot stop now”. “This is not the time to stop”. “We’ll stop later, when we are tired and hungry”.

This is why Carl began walking along the seashore. All these rules and reasons were very annoying. Carl only wanted to go outside and play. Why did he need so many reasons to walk? Carl was born and raised at the edge of a big, blue ocean. Oceans are not really blue, they only look blue. This is because your eyes make it appear blue. If you dip your cup in the ocean, you’ll find that it has no colour, so the ocean is not blue.

When Carl was little, and the grown-ups were making noises, he’d slip away quietly to avoid the pain it made in his ears. It was easy because he just walked away. He became very good at it. One day he walked along the seashore to a point of land that pushed itself into the sea. Beyond this point, he could not hear the noises anymore. This made him very happy, and the pain in his ears went away. It did not matter if the sun was shining or not. All that mattered was that he was alone and that the grown-up noises were gone. There were no grown-ups here and all he could hear was the sound of the waves crashing on the shoreline, and the birds talking. The birds are always talking with each other. Sometimes they speak softly and other times they speak loudly, but it doesn’t hurt the ears of little children. The birds float and dip in the wind. They talk to the ocean and the other birds.

Not far from the ocean there was a forest. It looked dark and scary from the seashore, but when he entered the forest all was quiet and peaceful. It was so quiet that he could hear someone talking inside his head. The voice said, “Come, don’t be afraid”. Carl wasn’t afraid because he was an explorer. All small children are explorers. He didn’t know why, but he knew it was true. He was exploring a new land. He was searching for a land where there were no grown-ups and no wars. He could not see or hear anyone, so he continued on his way. The sun was shining in between the trees to warm up the forest floor.

This floor was the biggest floor he had ever seen. The forest floor was covered with a soft green carpet. When he walked on it, it did not make any sound. He tried to make a noise, by jumping up and down, but he couldn’t. The moss on the forest floor would not let him. The moss said, “Be quiet please, the baby animals are sleeping”. The trees were tall, and he had to lean far back to see their tops. He leaned too far, and he fell on the floor. It didn’t hurt and he sat up. He heard a bird singing. He took off his boots and his stockings to walk on the forest floor. It felt good on his little feet. He stood up and walked to where the bird was singing.

All the trees were covered with thick, brown skin to protect them from the cold and to keep the water inside their bodies. They had long arms extending away from their bodies. This was a resting place for the birds. The birds stood on these long arms to sing. They stood on these arms when they got tired. Birds love the forest. It is less windy in the forest than it is over the ocean. This makes it easier for the small birds to fly. The ocean is where the wind is strong and cold. It is quieter in the forest, and the birds make little cups of grass and twigs here, to lay their eggs. Birds make tiny eggs to keep their babies warm and protected when they are young.

They make a little house inside their bodies so that when their babies come out they don’t have to get dressed right away. The mother bird sits on these eggs very gently. This is to keep them warm and safe. Later they will hatch. This is when the baby birds break their eggshells and tell their mother that they are big enough to come out and play. They say, “cheep, cheep, cheep”. This means that they are hungry and they want to eat now. Baby birds like to eat, and they eat a lot. When they are young, they’re always hungry. They eat little bugs and little worms. They taste very good. Their mouths are small and they can only eat small pieces of food.

Little birds cannot fly right when they are young because their wings are too short and they have no feathers on them. Their wings are covered with a tiny fur called down. Later they will grow feathers like their parents. Their feathers will be the same colour as their mother’s or father’s, depending on whether they are little boy birds or little girl birds. Most of the time they have brothers and sisters, and they all wait in their little baskets for their mothers and fathers to return home with tiny worms and bugs. They can only eat small pieces, so their parents have to cut up the bugs and worms into small pieces with their sharp beaks. They put the food in their little beaks because they have no plates and forks to eat with.

Carl stood up and started to walk towards the chirping sound. He had never heard this sound before. He was an explorer and he had to find out what was making that sound. It sounded like music. Something fell on his head. He looked up and saw a squirrel laughing at him. Carl said, “Hi! What is your name?” The small brown animal said, “I am a squirrel”. The squirrel dropped another shell on Carl’s head. Carl said, “Hey, why are you dropping things on my head”? The squirrel laughed and said, “Why are you standing there”? The squirrel made Carl laugh. The sun was shining and Carl and the squirrel were laughing.

Talk to the Ocean

He said, “Goodbye. Ocean”, and he began to walk home. He could not walk fast because his boots were in the Forest with the Tree. Carl said to the Ocean, “I will see you later when I come for my boots”.